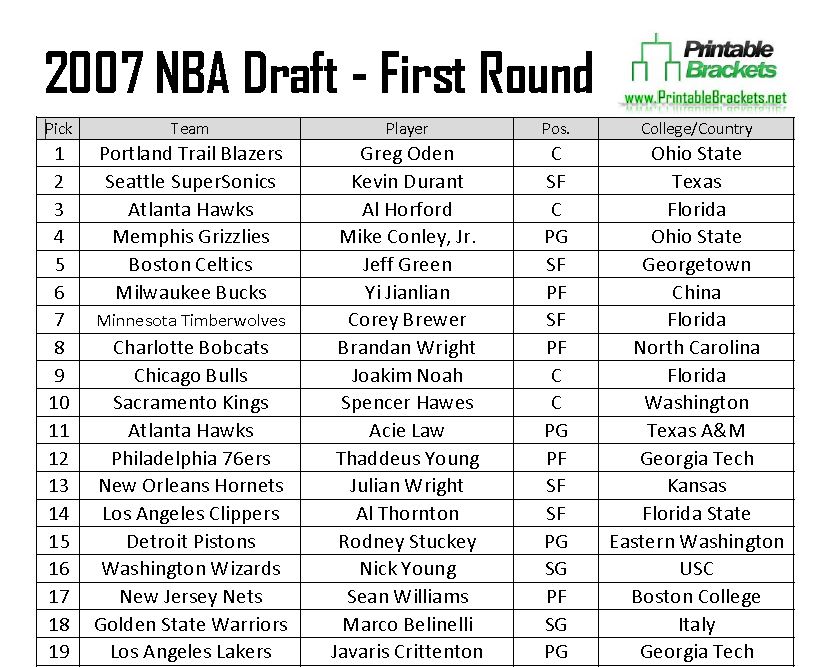 The Portland Trail Blazers selected center Greg Oden with the first overall pick in the 2007 NBA Draft. Oden joined the Blazers after spending one season at Ohio State. Oden helped the Buckeyes reach the national championship game in his only year with the team. Oden only appeared in 82 games in the first two years of his career. He was released by Portland in 2012.

With the second pick, the then-Seattle SuperSonics chose future All-Star and league MVP Kevin Durant. It wasn’t the first time Portland missed badly on a pick, as the Blazers infamously passed on Michael Jordan to select Sam Bowie with the second pick in the 1984 draft. Jordan went third to the Chicago Bulls.

Durant took home Rookie of the Year honors for the 2007-08 NBA season. Durant, along with Horford, Green, Al Thornton and Luis Scola were named to the NBA All-Rookie First Team. The most notable player selected in the second round of the 2007 NBA Draft is center Marc Gasol. Drafted 48th overall by the Los Angeles Lakers, Marc would later be traded to the Memphis Grizzlies in a deal involving his brother, Pau.

Joel Anthony, Anthony Tolliver and Gary Neal were among those who went unselected in the 2007 NBA Draft.