The combatants for the 2013 Final Four are set. The Louisville Cardinals, Michigan Wolverines, Syracuse Orange and Wichita State Shockers have outlasted the field to reach Atlanta. The national semifinals in the Final Four 2013 edition will take place Saturday, April 6th at the Georgia Dome. The national championship game will be played on Monday night, April 8th.

After two thrilling weeks of March Madness, only four teams remain. Of those four teams, the only number-one seed to survive the regionals was the Louisville Cardinals. After entering the NCAA Tournament as the top overall seed, the Cardinals rolled over North Carolina A&T, Colorado State and Oregon before dispatching of Duke in the Midwest final. Louisville also had to overcome a horrific injury to guard Kevin Ware, who gruesomely broke his leg in two places. Louisville is in the Final four for the third time since 2005, but hasn’t won the national title since 1986. 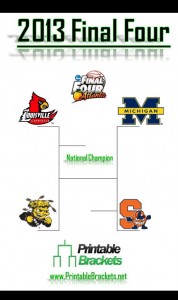 The ultimate Cinderella squad to reach this year’s Final Four is Wichita State, which took out Pitt, top-seeded Gonzaga and La Salle before beating Ohio State in the West regional final. The Shockers are appearing in the Final Four for the first time since 1965, which is also their only other trip. Wichita State will clash with Louisville in the first national semifinal.

The other side of the national bracket features a pair of perennial powers, but few expected they would reach this year’s Final Four. In the South Region, fourth-seeded Michigan trounced SDSU and VCU before staging a furious rally and beating Kansas in overtime. In the South final, Michigan pounded Florida to reach the Final Four for the first time since 1993.

Syracuse has been as impressive as any team in the 2013 NCAA Tournament. The Orange opened the tourney with an 81-34 win over Montana. After notching a six-point win over Cal, Syracuse slammed top-seeded Indiana 61-50. In the East final, Syracuse suffocated Marquette, 55-39, to get to back to the Final Four for the first time since winning the national championship in 2003.

Michigan and Syracuse will meet in the second national semifinal on Saturday.