Sixteen teams will enter the postseason, but only one will have the right to hoist the Larry O’Brien Trophy. The 2013 NBA Playoffs will get underway on Saturday, April 20th. The last possible date for Game Seven of the 2013 NBA Finals would be Thursday, June 20th. You can follow the action with an NBA playoff bracket. These brackets are perfect for those looking to set up an office pool, or for fans who want to who their team could wind up playing in the next round and beyond.

The NBA expanded the playoff field to the current 16-team field in 1984. From 1977-84, the top two seeds in each conference earned a first-round bye. Under the new format, byes were eliminated and all teams played in the opening round.

In ’84, the first round was a best-of-five series. The NBA later changed this to a best-of-seven series in 2003, meaning all rounds of the playoffs are now seven-game sets. Each team would have to win three playoff series before earning the right to advance to the best-of-seven NBA Finals. In the championship series, the team with the best record will host the first two games before the set shifts for the next three games. If Games 6 and 7 are necessary, they would be played back at the home of the higher seeded team. 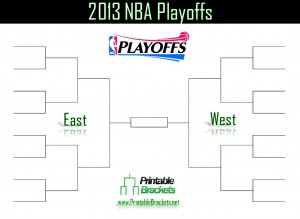 Entering the 2013 NBA Playoffs, no team has more championships than the Boston Celtics. The C’s have captured 17 titles during their storied history. While their last title came in 2008, their last of four losses in the Finals came in 2010. That loss was to the Los Angeles Lakers, who have captured the NBA’s ultimate prize 16 times. The Lakers, who won five of their championships while playing in Minneapolis, have also lost in the Finals 15 times.

LeBron James, Dwyane Wade and the Miami Heat enter the 2013 NBA Playoffs looking to defend their title. James and the Heat beat Kevin Durant and the Oklahoma City Thunder in 2012. With the series win, James and the Heat avenged losing to the Dallas Mavericks in the 2011 Finals.