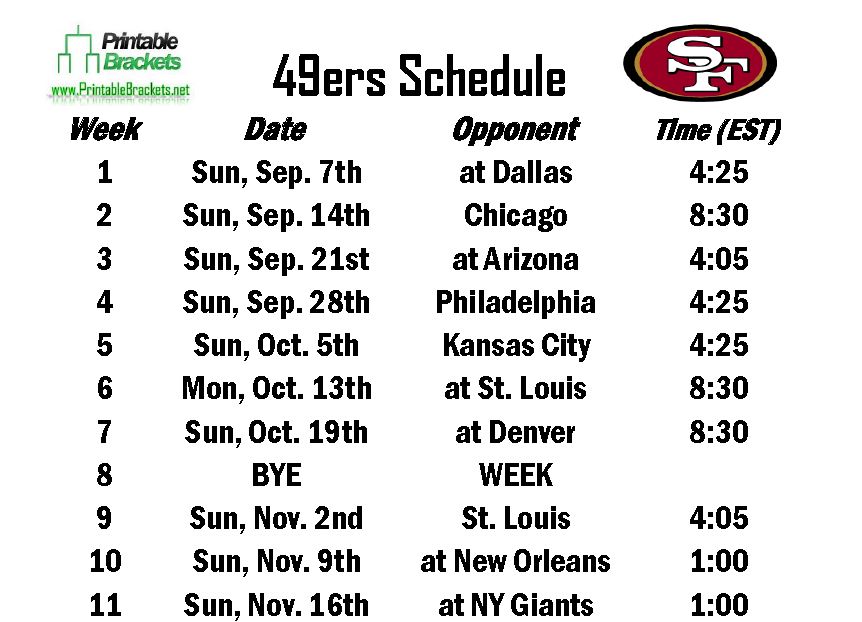 Some of the greatest players in NFL history have suited up for the San Francisco 49ers. Hall of Famers Joe Montana, Steve Young and Jerry Rice are just a few of the names that are part of the franchise’s impressive history. Before taking a look at the upcoming 49ers schedule, it’s never a bad time to take a look back at the past.

49ers Schedule: Past and Present

The 49ers broke into the National Football League after the All-America Football Conference merged with the NFL in 1949. The team’s moniker derives from the gold prospectors who were in Northern California in the 1800s. The 49ers have the distinction of being the oldest professional team in the state of California.

The direction of the franchise changed forever upon the arrival of head coach Bill Walsh and quarterback Joe Montana in the late 1970’s. The 1980’s were dominated by Walsh, Montana and the red and gold; as the Niners would go on to capture Super Bowl titles for the 1981, 1984, 1988 and 1989 seasons. After Montana’s departure, Steve Young would go on to lead San Francisco to a blowout victory over the San Diego Chargers in Super Bowl XXIX during the 1994 season.

Walsh, Montana, Young and Jerry Rice are just a few of the players enshrined in the Hall of Fame who suited up for San Francisco. Other notable names include Y.A. Tittle, Joe Perry, Jimmy Johnson, Dave Wilcox, Fred Dean, Ronnie Lott and Deion Sanders.

The current incarnation of the Niners is led by head coach Jim Harbaugh and young star quarterback Colin Kaepernick. The Nevada product Kaepernick replaced incumbent quarterback Alex Smith during the 2012 season and led San Francisco to the NFC Championship. Despite staging a furious second-half rally, the Niners suffered a 34-31 loss to the Baltimore Ravens in Super Bowl XLVII.

The 49ers enter the 2014 season with five Super Bowl titles, six NFC titles, 19 division championships and 26 playoff appearances. The Niners will leave the legendary Candlestick Park to move into Levi’s Stadium for the 2014 season.