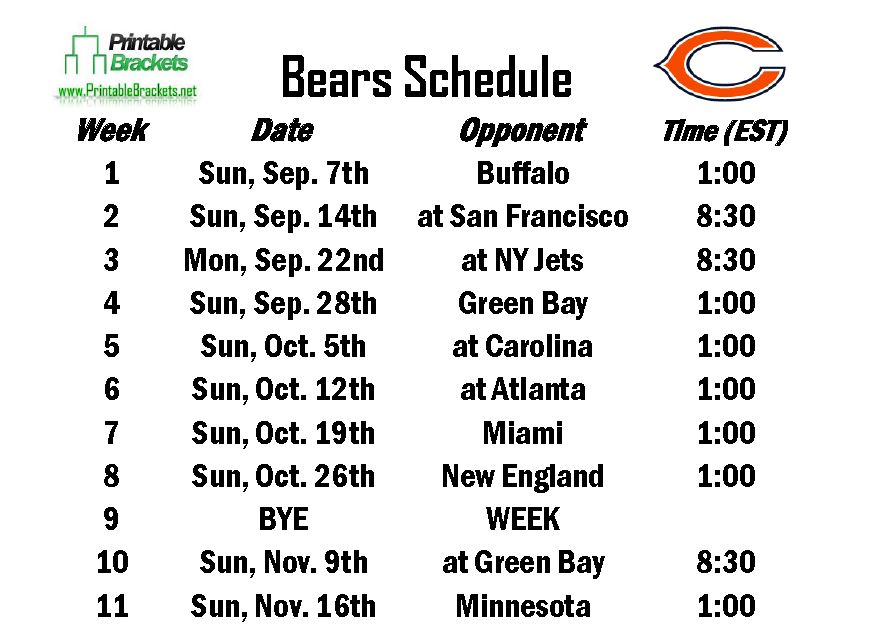 The Chicago Bears are one of the most storied franchises in the history of the National Football League. Along with the now Arizona Cardinals, the Bears have the distinction of being one of the only two remaining teams from the NFL’s inception. Before looking forward to the upcoming Bears schedule, let’s take a look back at the franchise’s legendary past.

Bears Schedule: Past and Present

The Bears were originally known as the Decatur Staleys when they were founded in 1919 in Decatur, Illinois. They later moved to Chicago in 1921, became the Bears in 1922 and played home games at Wrigley Field. The Bears moved to their current home, Soldier Field, in 1971.

The “Monsters of the Midway” have captured nine NFL championships, including their blowout win over the New England Patriots in Super Bowl XX. The Super Bowl team was guided by head coach Mike Ditka, who replaced the legendary George Halas in 1982.

The Bears have notched more regular season and overall wins than any other club in NFL history. Chicago captured its 700th win in November 2010. Chicago has also clashed with the bitter rival Green Bay Packers an astounding 185 times entering the 2013 season. Through 2012, the Bears have beaten the Packers 92 times.

Some of the greatest players to ever suit up in the NFL have done so for the Bears. The franchise currently holds the all-time record with 27 players in the Hall of Fame. Some of the notable names in Canton include Halas and Ditka, George Blanda, Dick Butkus, Sid Luckman, Bronko Nagurski, Richard Dent, Mike Singletary, Gale Sayers and Walter Payton.

The current incarnation of the Bears is led by quarterback Jay Cutler and standout wide receiver Brandon Marshall. The 2014 campaign marks the 95th season in franchise history.