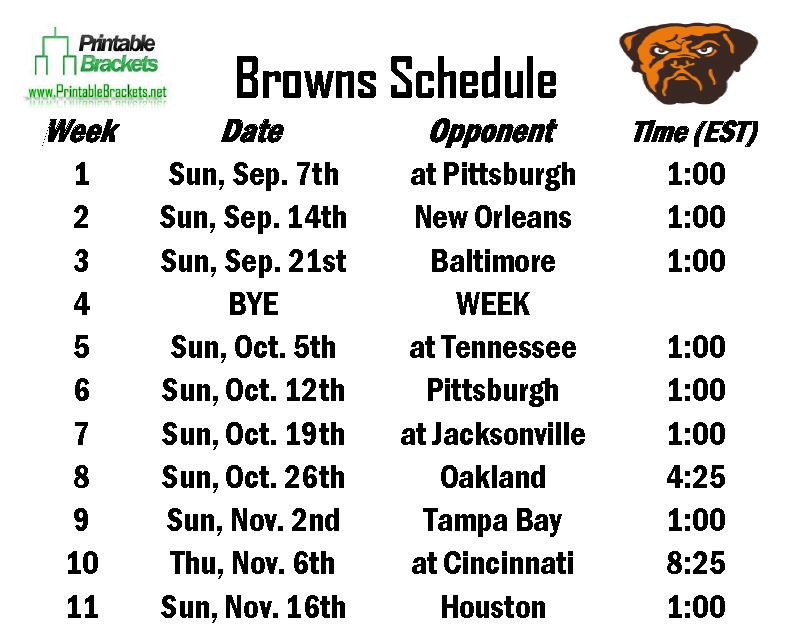 The history of the Cleveland Browns is full of heartbreak and controversy. The Browns enter the 2013 season trying to shake decades of disappointment. Before viewing the upcoming Browns schedule, let’s take a look at years past.

Browns Schedule: Past and Present

The Browns began play as an original member of the All-America Football Conference in 1946. The team’s moniker derives from its first head coach, Paul Brown. The Browns won all four AAFC Championship Games from 1946-49.

The Browns joined the NFL after the AAFC merged in 1950. Cleveland opened NFL play with a 35-10 trouncing of the two-time defending champion Philadelphia Eagles. The Browns went on to win the championship in their first season. Cleveland would also capture the NFL title in 1954 and 1955.

In 1957, the Browns selected running back Jim Brown in the first round for the NFL draft. Four years later, the Browns were purchased by Art Modell, who fired Paul Brown in 1963. Blanton Collier took over and helped lead the Browns to the 1964 NFL title. Entering 2013, the championship is the last won by a major professional sports team in Cleveland.

The Browns had little success after the NFL-AFL merger in 1970. Cleveland lost all five of its playoff appearances from 1971-1985. The Browns finally broke through with a Divisional Round playoff victory over the in 1986, but suffered a 23-20 overtime loss to the Broncos in the AFC Championship Game.

The Broncos forced overtime when John Elway engineered a 98-yard touchdown drive with 37 seconds left in the fourth quarter. “The Drive” led the first-ever AFC title game that went to overtime. In addition, it was the first of three losses to the Broncos in the AFC title game in four years.

In 1994, head coach Bill Belichick led the Browns to a Wild Card win over the Patriots. The celebration wouldn’t last long, as owner Art Modell announced in November 1995 that he was moving the team to Baltimore. The Browns moved after the 1995 season and became the Baltimore Ravens.

After being “inactive” for three seasons, a new, expansion version of the Browns joined the NFL in 1999. Since rejoining the league, the Browns have had only two winning seasons and only one playoff appearance.