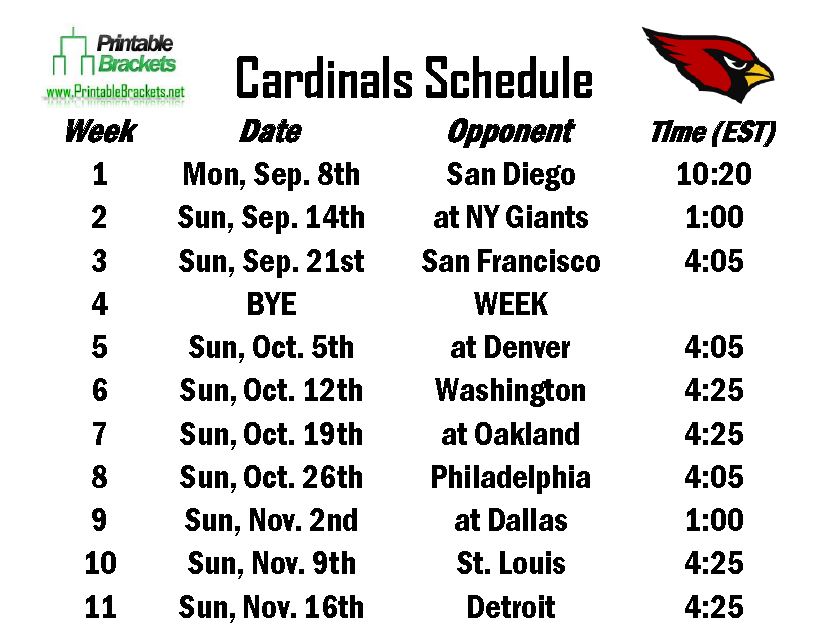 The Arizona Cardinals are the oldest-run professional football team in the United States. The team has taken quite the journey to Arizona in its lengthy history. Before glancing at the upcoming Cardinals schedule, let’s take a look at how the Cardinals made it to the desert.

Cardinals Schedule: Past and Present

The Cardinals’ franchise was founded in Chicago in 1898. The team would later become one of the original members of the NFL in 1920. Along with the Chicago Bears, the Cardinals are one of the only two remaining original NFL teams.

The Cardinals played in Chicago until moving to St. Louis in 1960. During the team’s stay in St. Louis, they appeared in the playoffs only three times and lost all three games. The Cards played in Missouri until bolting for Arizona after the 1987 season.

The new Phoenix Cardinals struggled in their first six years in Arizona. The Cards went 32-64 during that stretch and later decided to rename themselves the Arizona Cardinals in 1994.
The Cardinals had only one playoff win in their first 19 years in the desert. In 2007, the Cardinals named Ken Whisenhunt their new head coach. That year, they finished 8-8 to post only their third non-losing record since relocating.

Led by former MVP quarterback Kurt Warner, the Cardinals enjoyed their most successful season in Arizona in 2008. The Cards captured their first home playoff victory in 63 years en route to their first Super Bowl appearance in franchise history. The magical campaign ended with a heartbreaking 27-23 loss to the Pittsburgh Steelers in Super Bowl XLIII.

Through all the relocations, stadiums and name changes, one thing has remained constant. The Cardinals have always had red jerseys as part of their set of uniforms since 1898.