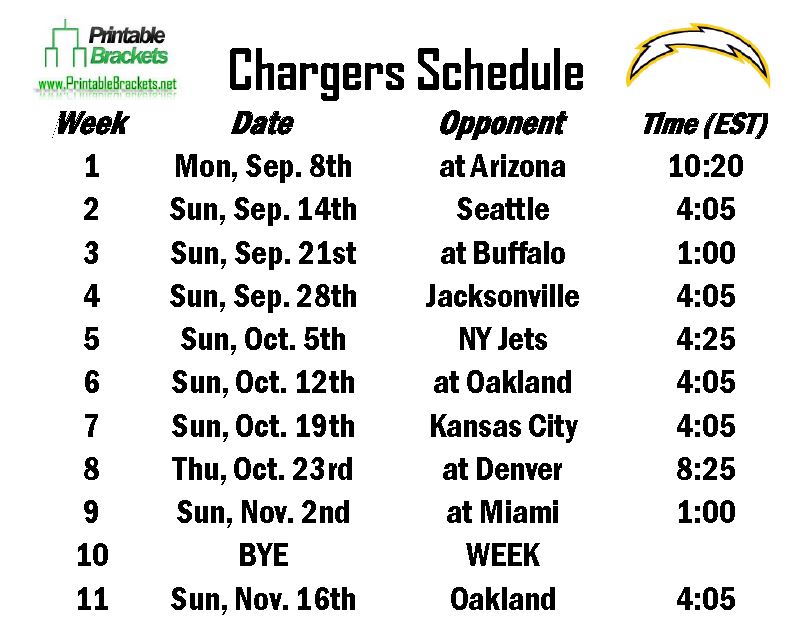 Due in large part to their uniforms, the San Diego Chargers are one of the most recognized teams in the NFL today. However, there’s much more to the “Bolts” than white helmets and powder blue jerseys. Before taking a look ahead to the new Chargers schedule, let’s take a look back at the history of the team.

Chargers Schedule: Past and Present

The Chargers are one of the original members of the American Football League, but the franchise was based in Los Angeles. The team spent one year in L.A. before moving to San Diego in 1961. In 1967, the Chargers moved to San Diego Stadium. The facility has since been renamed Qualcomm Stadium and remains the home of the team.

During its AFL run, San Diego won divisional titles in five of the first six seasons and won the AFL title in 1963. The team joined the NFL along with the rest of the AFL during the 1970 merger. The Bolts went without a playoff appearance for their first eight NFL seasons.

Led by quarterback Dan Fouts and tight end Kellen Winslow, the Chargers won three straight division titles from 1979-81. San Diego earned a memorable 41-38 overtime playoff win over the Miami Dolphins in ’81. However, the Bolts suffered a nearly as memorable 27-7 loss to the Cincinnati Bengals the following week.

The 1994 season remains the franchise’s most successful to date. Led by Junior Seau and Stan Humphries, the Chargers went 11-5 and won the AFC West title. San Diego went on to stun the Pittsburgh Steelers in the AFC Championship Game to reach the Super Bowl for the first time in franchise history. However, the Chargers were obliterated by the San Francisco 49ers, 49-26, in Super Bowl XXIX.

The 2013 Chargers will be led by new head coach Mike McCoy, who takes over for the fired Norv Turner. The 40-year-old McCoy will be entering his first season as a head coach. He will have former Arizona Cardinals head coach and new offensive coordinator Ken Whisenhunt on his staff. Returning for the Bolts will be veteran quarterback Philip Rivers and tight end Antonio Gates.

The Chargers enter the new season with one conference title, 15 division titles and 18 playoff appearances.