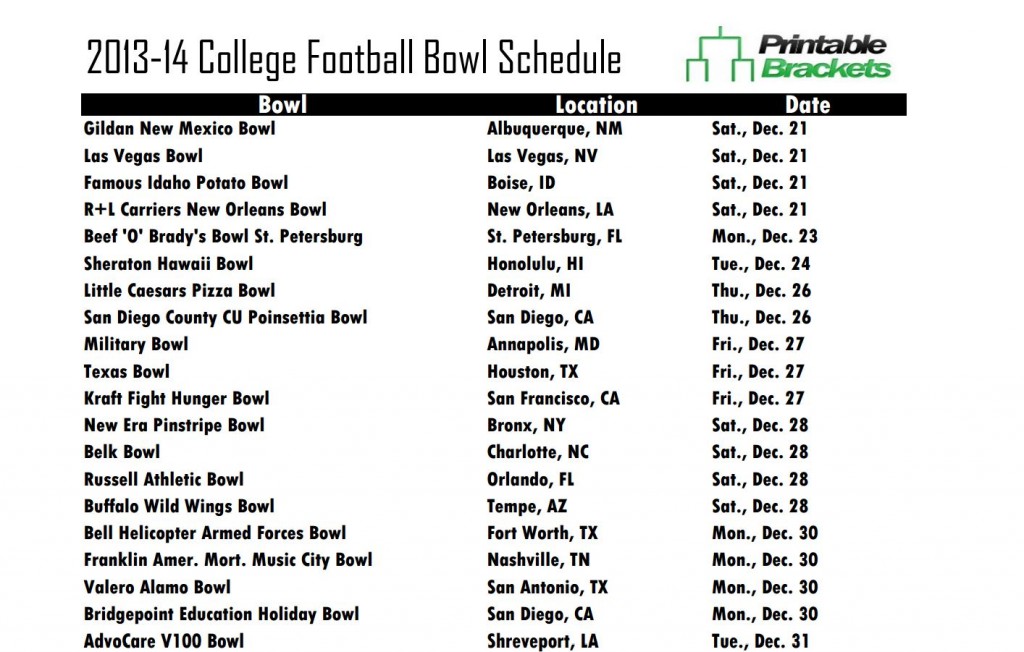 The history of the college football bowl schedule began with the Rose Bowl. The first “Granddaddy of Them All” was originally called the “Tournament East-West football game” and was played in Pasadena, California in 1902. In the first game, Michigan smashed Stanford, 49-0. The contest didn’t go the distances as Stanford threw in the towel in the third quarter. Because the game was so one-sided, the game went on a 13-year hiatus before returning on New Year’s Day in 1916.

The 2013-14 college football bowl schedule opens up with the Gildan New Mexico Bowl in Albuquerque, New Mexico on Saturday, December 21st. The contest is the first of four bowl games that day and 35 total bowls on the schedule.

New Year’s Day 2014 will feature six bowls, including the Rose Bowl and the Fiesta Bowl. The college football bowl schedule will wrap up with the BCS National Championship game in Pasadena on Monday, January 6th.

This season marks the final year without a playoff system. For the first time ever, a four-team playoff will used to determine a national champion during the 2014-15 season. The semifinals will take place at the Rose Bowl and Sugar Bowl, while the national title game will be held at Cowboys Stadium in Arlington, Texas on January 12th, 2015.