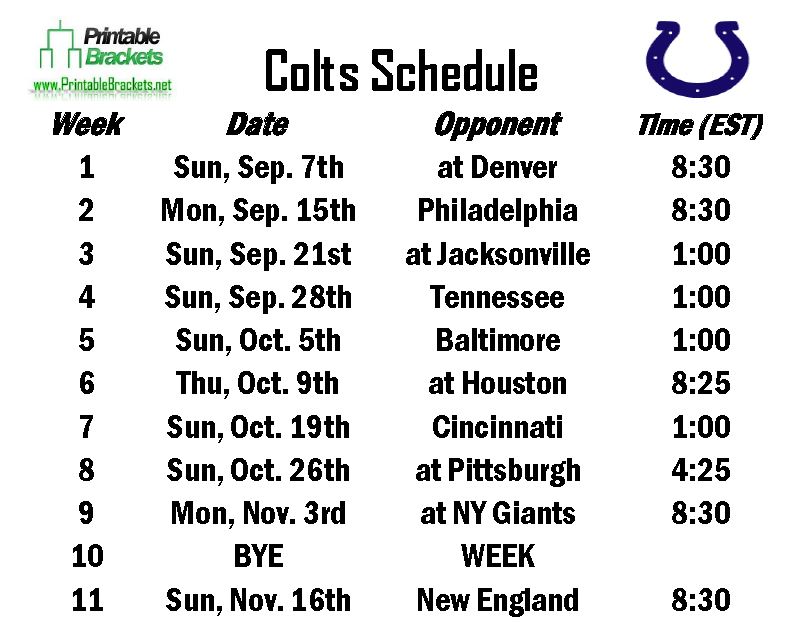 The Indianapolis Colts are known for having some of the greatest quarterbacks to ever play the game. The team is also known for one of the most controversial moves in NFL history. Before looking ahead to the Colts schedule, let’s take a look back at the storied history of the franchise.

Colts Schedule: Past and Present

The Colts’ franchise was founded in 1953 in Baltimore, Maryland. The team’s moniker derives from Baltimore’s history of horse racing, most notably the Preakness Stakes. The Colts also have the distinction of being the first team to feature cheerleaders and a marching band.

After slumping through their first few season, quarterback Johnny Unitas and head coach Weeb Ewbank lead the Colts to the NFL Championship game in 1958. That year, the Colts outlasted the New York Giants in overtime, 23-17, in what is widely considered to be one of the best games in NFL history. Many have gone as far as to dub the contest the “NFL’s Greatest Game.” The Colts beat the Giants again in the 1959 title game.

In 1968, the Colts cruised to the NFL championship and were 18-point favorites in Super Bowl III. However, Baltimore was shocked by Joe Namath and the New York Jets, 16-7.
The Colts continued to play in Baltimore until 1983 season. On March 29, 1984, the Colts left Baltimore for Indianapolis in the middle of the night. Baltimore would be without a franchise until the Browns left Cleveland and became the Ravens in 1996.

The Colts started their run in Indy with the 1984 season, but they wouldn’t win their first playoff game until 1995 when Jim Harbaugh nearly led the team to the Super Bowl. In 1998, the Colts selected quarterback Peyton Manning with the top overall pick in the draft.

With Manning under center, the team would go on to have one of the greatest runs of success in NFL history. From 1999-2010, the Colts won eight division titles and appeared in the playoffs 11 of the 12 years. The run was culminated by a victory over the Chicago Bears in Super Bowl XLI.

During the 2012 offseason, the team parted ways with Manning and selected quarterback Andrew Luck with the top overall pick. Luck led the Colts to an 11-5 record and a Wild Card berth in 2012.