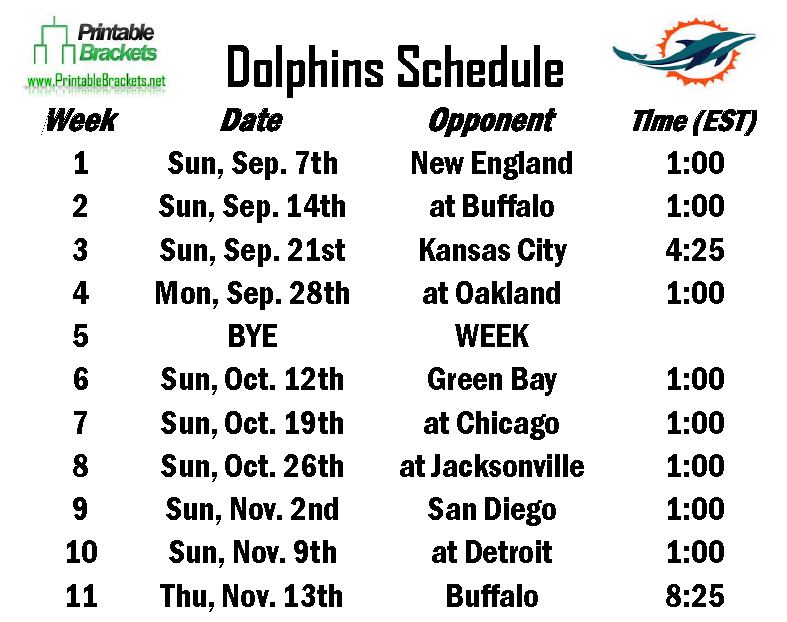 Some of the most legendary names in NFL history have spent time with the Miami Dolphins. In addition, the Dolphins have the distinction of fielding the only perfect team in league history. Before looking to the new Dolphins schedule, let’s take a glance back at the franchise’s history.

Dolphins Schedule: Past and Present

The Miami franchise was founded in 1966 and started play in the American Football League. The Dolphins earned their moniker after a contest was held to determine their name. The “Dolphins” were selected over more than a thousand different suggestions.

The Dolphins failed to have a winning season during their stint in the AFL, but reached the playoffs in their first season in the NFL after the merger in 1970. In 1972, the Dolphins ran the table to post the only perfect season in NFL history. The year was culminated by a 14-7 win over the Washington Redskins in Super Bowl VII. The Dolphins then dumped the Minnesota Vikings, 24-7, in Super Bowl VIII.

The Dolphins were coached by the legendary Don Shula from 1970-95. With 347 victories, Shula is the winningest coach in NFL history. Shula won five AFC titles and was named the NFL Coach of the Year four times.

In 1983, the Dolphins selected quarterback Dan Marino with the 28th overall pick in the draft. Marino would go on earn nine Pro Bowl selections, and NFL MVP honors in 1984. Marino guided the Dolphins to an appearance in Super Bowl XIX, but Miami came up short against Joe Montana and the San Francisco 49ers, 38-16. Marino ended up in the Hall of Fame, but was never able to lead Miami to a Super Bowl title.

Marino retired after the 1999 season and the Dolphins are still in search of his heir apparent. Miami has only one playoff victory and three playoff appearances since Marino’s retirement.
The current version of the Dolphins is led by head coach Joe Philbin and quarterback Ryan Tannehill. The Dolphins went 7-9 in their first year under Philbin in 2012. The Dolphins took Tannehill with the eighth overall pick in the 2012 draft. In his rookie season, Tannehill threw for 3,294 yards, 12 touchdowns and 13 interceptions.