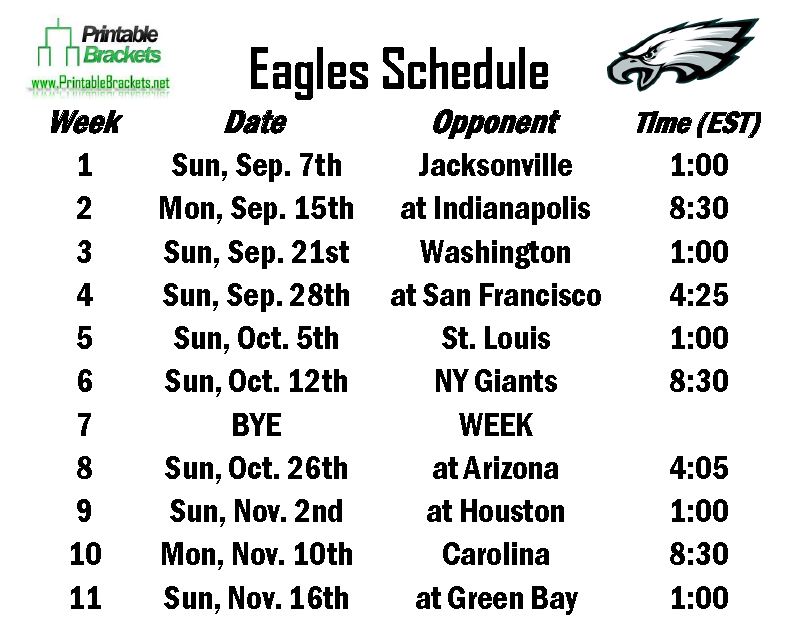 The Philadelphia Eagles are one of the more storied franchises in the NFL. While known in part for their boisterous and unapologetic fans, the Eagles have also had extended stretches of great success. Before taking a look at the upcoming Eagles schedule, let’s go back and revisit the franchise’s history.

Eagles Schedule: Past and Present

The Eagles joined the NFL in 1933 as an expansion team. Philadelphia was granted the franchise after the Frankford Yellow Jackets went bankrupt. The Eagles began play in the NFL the same year as the Pittsburgh Steelers.

From 1933-42, the Eagles struggled mightily, finishing with no more than five wins each year. Because of World War II, the Eagles merged with the Steelers to become the “Steagles” during the 1943 season. After going 5-4-1 that year, the Eagles alone resumed play in 1944.

The Eagles appeared in their first NFL Championship Game in 1947, but lost to the Chicago Cardinals. However, Philadelphia would go on to win the next two NFL title games, beating the Cardinals and Rams. The Eagles also beat the Packers for the title in 1960, marking the last time they won a championship.

The Eagles didn’t make the playoffs again until 1978 when the team was led by head coach Dick Vermeil and quarterback Ron Jaworski. Philadelphia reached the title game in 1980, but suffered a 27-10 loss to the Raiders in Super Bowl XV.

A new era began in 1999 when the team hired head coach Andy Reid and selected quarterback Donovan McNabb in the first round of the draft. The Eagles would appear in four straight NFC title games from 2001-2004. After three straight championship game losses, Philadelphia broke through in 2004, but suffered a 24-21 loss to the Patriots in Super Bowl XXXIX. The Eagles returned to the NFC title game in 2008, but fell to the Arizona Cardinals.

The Eagles stunned the football world in 2009 when they signed quarterback Michael Vick shortly after he was released from prison. Philadelphia traded McNabb in 2010 and Vick led the Eagles to the playoffs the ensuing season. However, Philadelphia hasn’t won a playoff game since 2008.

After a 4-12 2012 campaign, the Eagles fired Reid and replaced him with former Oregon head man Chip Kelly. The Eagles enter the 2014 season still in search of their first Super Bowl win.