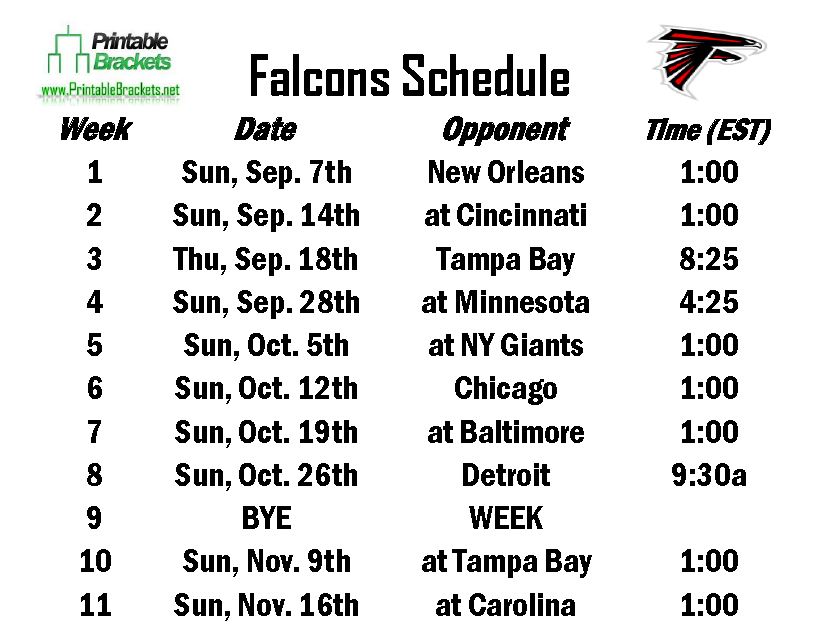 The Atlanta Falcons have fielded a pair of the most electrifying players to ever step on an NFL field. However, the Falcons have also had their share of controversy with the very same showstoppers. Before looking at this year’s Falcons schedule, let’s go back and look at the team’s history.

Falcons Schedule: Past and Present

In ’91, the Falcons also drafted another future Hall of Famer in quarterback Brett Favre. However, Atlanta traded Favre to the Green Bay Packers after he only appeared in two games in his rookie season.

The Falcons were the class of the NFC in 1998. Led by head coach Dan Reeves and running back Jamal Anderson, the Falcons shocked the Minnesota Vikings in the NFC Championship Game to reach the Super Bowl for the first time in franchise history. However, the celebration was short-lived as the Falcons were blown out by John Elway and the Denver Broncos, 34-19, in Super Bowl XXXII.

In 2001, the Falcons brokered a deal with the San Diego Chargers that allowed them to select quarterback Michael Vick with the top pick in the NFL Draft. Vick became one of the most popular players in the league and led the team to a pair of playoff wins, but he was suspended and ultimately jailed for his participation in a dogfighting ring after the 2006 season.

Bobby Petrino took over as head coach and Joey Harrington became quarterback in 2007. The disastrous season was highlighted by Petrino suddenly resigning to take the same job at Arkansas with three games left in the year.

The current version of the Falcons began in 2008 with the hiring of head coach Mike Smith and the drafting of quarterback Matt Ryan.