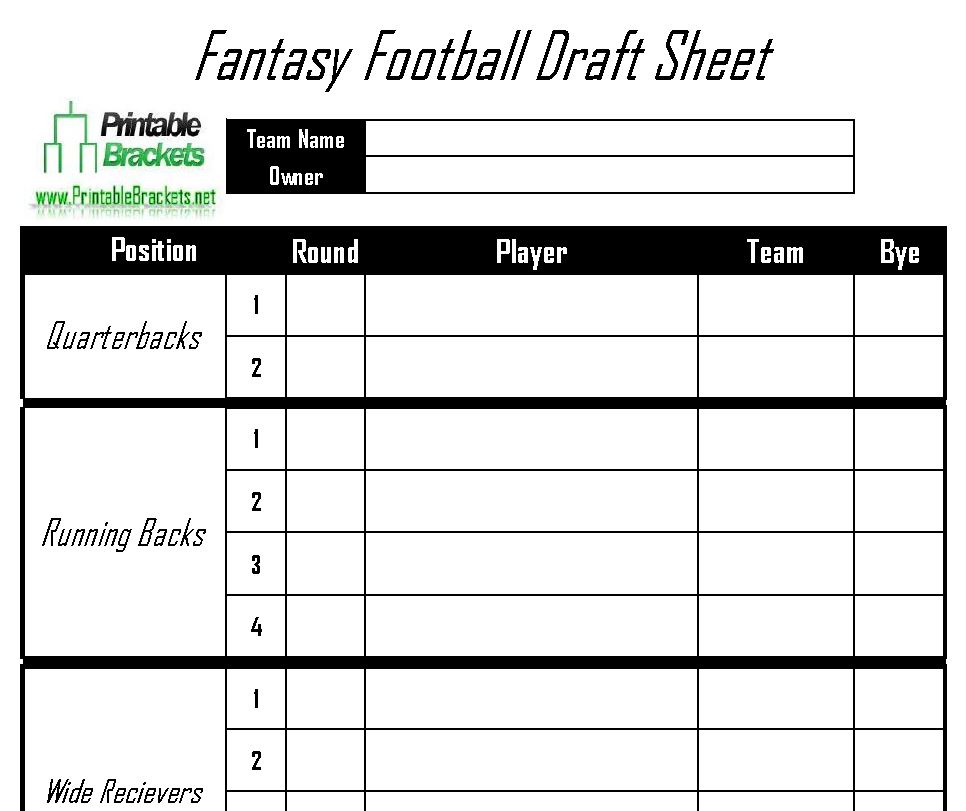 The NFL has easily become the most popular sport in the United States, and the popularity of fantasy football has surged right along with the league. According to the Fantasy Sports Trade Association, nearly 24-million people participate in fantasy football leagues. The first step in creating a fantasy champion is holding a draft. You can take the first step toward hoisting the trophy with a customized fantasy football draft sheet.

The billion-dollar business that is fantasy football can get expensive for some, but the PrintableBrackets.net Fantasy Football Draft sheet is instantly downloadable, printable and absolutely free.

The fantasy football draft sheet found on this page is primarily designed for those participating in live drafts held at a home, bar or restaurant. However, those participating in a live computer draft from the comfort of their home or office may also find it very useful. Instead of clicking back and forth between pages, simply jot down who you selected so you can see which spots/positions you need to fill as the draft rolls on.

The PrintableBrackets.net fantasy football draft sheet is designed for more traditional drafts. At the top of the sheet you will find a space to enter both your name and the name of your team. This is especially helpful if you need to submit sheets during a live draft.

Here is the position breakdown and available corresponding spots:

Once you’ve selected a player, simply fill in the round the player was selected, the player’s name, the player’s team and what week the player will be on a bye. The fantasy football draft sheet can be modified manually depending upon the rules of your league.

There’s no limit to the amount of draft sheets you can download and print. Whether you’re in a 10-team, 12-team or 32-team league, these fantasy football draft sheets will be the perfect addition to your league’s draft.