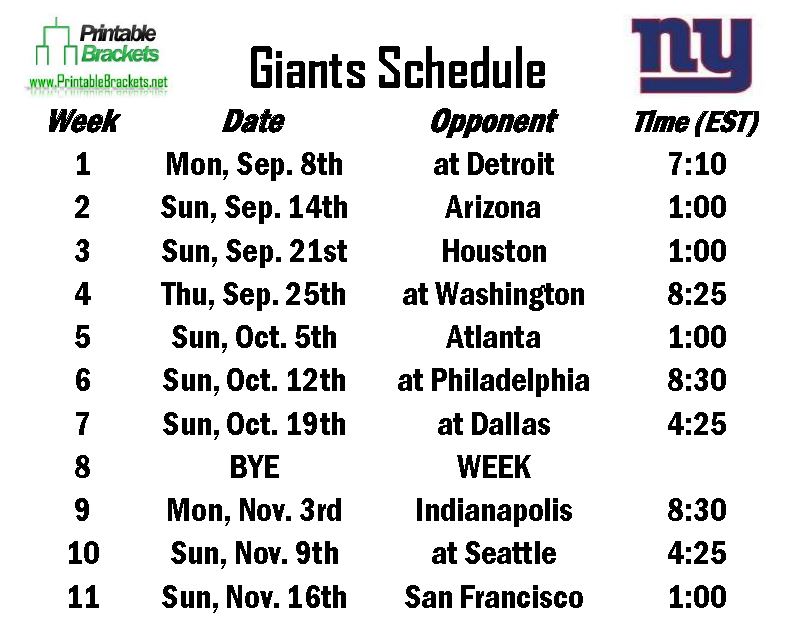 The New York Giants are one of the most recognized and respected franchises in all of professional sports. From Frank Gifford and Sam Huff to Phil Simms and Lawrence Taylor, some of the game’s all-time greats have suited up for “Big Blue.” Before visiting the upcoming Giants schedule, let’s revisit the franchise’s legendary past.

Giants Schedule: Past and Present

The first of New York’s five straight losses in the NFL Championship Game came in 1958. That year, the Giants suffered a 23-17 overtime loss to the Baltimore Colts in what many have dubbed the Greatest Game Ever Played.” New York also lost in 1959, ’61, ’62 and ’63.

The Giants would languish in mediocrity for nearly two decades, failing to reach the postseason from 1964-80. In 1979, the Giants drafted quarterback Phil Simms. In 1981, the team selected linebacker Lawrence Taylor, who helped guide the team to its first playoff berth since ’63 the same season. The course of the franchise continued its uptick when Bill Parcells was named head coach in 1983.

After suffering playoff losses in 1984 and ’85, the Giants went 14-2 and reached the Super Bowl for the first time in 1986. Simms led New York to a 39-20 victory in Super Bowl XXI. He was named MVP for his nearly flawless performance. The Giants returned to the big game in 1990 and captured a dramatic 20-19 victory over the Buffalo Bills in Super Bowl XXV.

Jim Fassel and Kerry Collins helped the Giants become the class of the NFC once again in 2007, but the Baltimore Ravens blasted them in Super Bowl XXXV, 34-7.

In 2004, the Giants made Tom Coughlin their head coach and brokered a trade with the San Diego Chargers that allowed them to acquire the draft rights to quarterback Eli Manning. After suffering back-to-back first-round playoff losses in 2005 and 2006, the Giants shockingly won the NFC title in 2007. The same year, the Giants pulled off one of the greatest upsets in NFL history by defeating the previously undefeated New England Patriots, 17-14, in Super Bowl XLII.

The teams would meet again in Super Bowl XLVII, and again Coughlin, Manning and the Giants got the best of the Patriots, 21-17. Manning won Super Bowl MVP honors in both games.