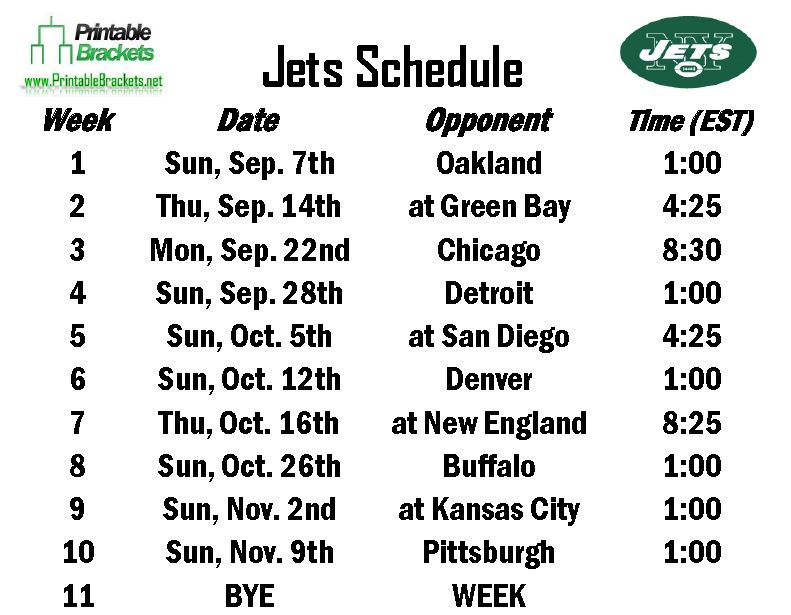 The New York Jets are an easily-recognizable franchise in the NFL. However, the Jets no longer player in New York, and didn’t start out as the Jets or in the NFL. Before glancing at the new Jets schedule, let’s take a look at the Jets of years past.

Jets Schedule: Past and Present

The franchise known as the New York Jets started out as the New York Titans in 1960. The Titans were one of the original eight teams in the American Football League and spent their first three years with the moniker. The franchise was renamed the Jets in 1963. The course of the franchise continued to change when quarterback Joe Namath signed with the team in January 1965.

In 1968, Namath led the Jets to an 11-3 record and a 27-23 win over the Oakland Raiders in the AFL Championship Game. With the win, the Jets earned the right to face the Baltimore Colts in Super Bowl III. The Colts were double-digit favorites, but Namath famously guaranteed the Jets would win three days before the game. “Broadway Joe” went on to lead the Jets to a 16-7 win over the Colts in one of the biggest upsets in football history.

The Jets reached the playoffs the following season, but didn’t appear in the postseason again until 1981. In 1982, the Jets notched two playoff victories before falling to the Miami Dolphins in the AFC Championship Game.

Formally of the crosstown-rival New York Giants, head coach Bill Parcells led the Jets to a 12-4 record and the AFC East title in 1998. The Jets ultimately lost to the Denver Broncos in the AFC title game.

In 2009, the Jets made Rex Ryan their new head coach and selected quarterback Mark Sanchez in the first round of the NFL Draft. The Jets finished 9-7 in ’09 and snuck in to the playoffs. New York knocked off the Cincinnati Bengals and San Diego Chargers before suffering a 30-17 loss to the Indianapolis Colts in the AFC Championship Game. The Jets went 11-5 and reached the conference title game the following year, but against lost to the Pittsburgh Steelers.

The Jets enter the 2014 campaign in search of their first AFC title.