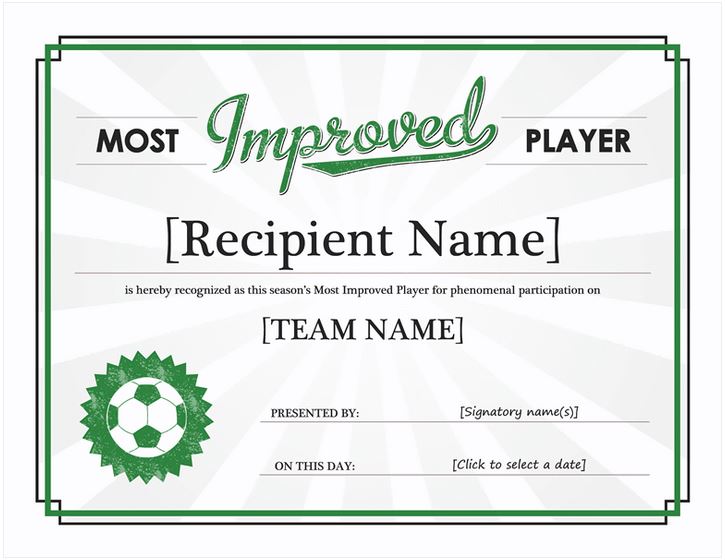 While almost every athletic event will have place for Most Valuable Player awards, there are many times where the most improved player is forgotten. With this Most Improved Player certificate template, you will be able to give out this award to the player(s) that have shown the most improvement over the past 6 to 12 months.

Using the Most Improved Player Template

The Most Improved Player Certificate template is designed to be simple and effective. When you edit the document, you will add in the name of the school/organization/sports team that is represented. Ensure that the name of the student receiving the award is in the biggest font, because you want it to stand out above everything else that is written.

Include the sport(s) in question, in addition to the name of the coach or teacher that gives out the award. You may want to include a space for the coach/teacher’s signature, in addition to the logo of the school or sports team that is giving out the award. These touches will make the award a great deal more special. Do not forget to put in the date that the award was given out. The date can be written specifically, or you can just include the year that the award is for.

When you download this file from the link that is given, you will open it in Microsoft PowerPoint. Ensure that you save a copy of the unedited version, which will give you something to go back to every time. From there, you can create new file saves every time you make a new version. For example, if you are having a 2013 Intramural Soccer Tournament, ensure that Most Improved Player certificate is named appropriately. It will help you remember the different Most Improved Player certificate designs you have already used.

Giving out Most Improved Player Awards is a great way to boost the confidence of players who have been working hard to improve their athletic abilities.