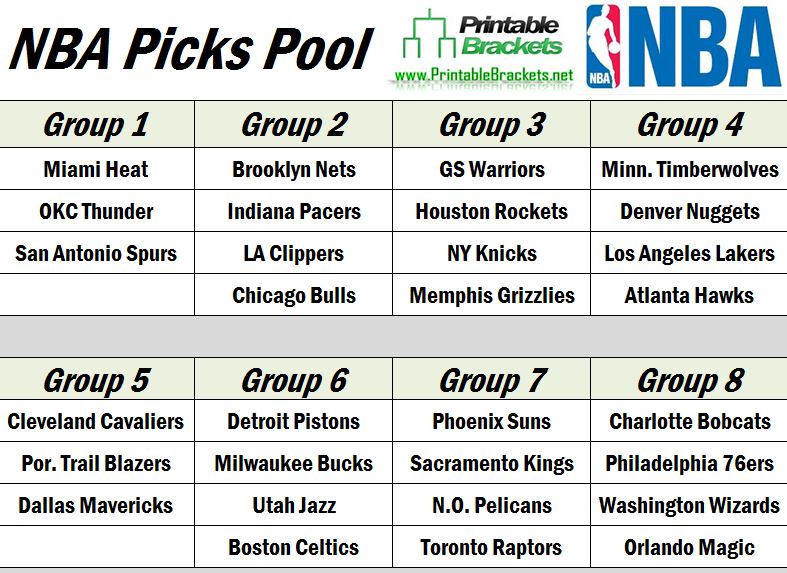 Tip-off of the 2013-14 NBA season is rapidly approaching. A great way to follow the 82-game grind that is the regular season is with the NBA picks pool. With the NBA picks pool sheet, you can keep tabs on your favorite teams and bitter rivals all on one sheet. You can also run a fun contest at your home or office that runs until the Larry O’Brien trophy is raised by the NBA champion.

You can download and print the NBA picks pool for the 2013-14 season absolutely free courtesy of PrintableBrackets.net. Click the link located on this page to get started!

LeBron James and the Miami Heat enter the 2013-14 NBA season as the two-time defending champions. After pulling off a dramatic 103-100 overtime win in Game Six of the NBA Finals, the Heat captured their second straight crown with a 95-88 victory over the San Antonio Spurs in Game Seven.

The Heat will open up the new season at home against the Chicago Bulls, who lost to the Heat in the second round of the playoffs. The Bulls will once again have the services of star guard Derrick Rose, who missed all of last season due to an ACL injury.

In addition to the Heat-Bulls match-up, two other games are featured on “Opening Night” on Tuesday, October 29th. The season will officially tip off when the Indiana Pacers host the Orlando Magic. Later in the evening, the Los Angeles Clippers will clash with the cross-town rival Lakers. Meanwhile, Dwight Howard will make his Rockets debut when Houston hosts the Charlotte Bobcats on Wednesday, October 30th.

The 30 NBA teams are split up in to eight different groups on the NBA picks pool sheet. To participate in the NBA picks pool, select a single team from each group. This team will be yours for the duration of the season and postseason.

Each victory during the season is worth a point. If you care to make the NBA picks pool more interesting, you can make wins worth double during select weeks of the season. You can also increase the value of a playoff or NBA Finals win.