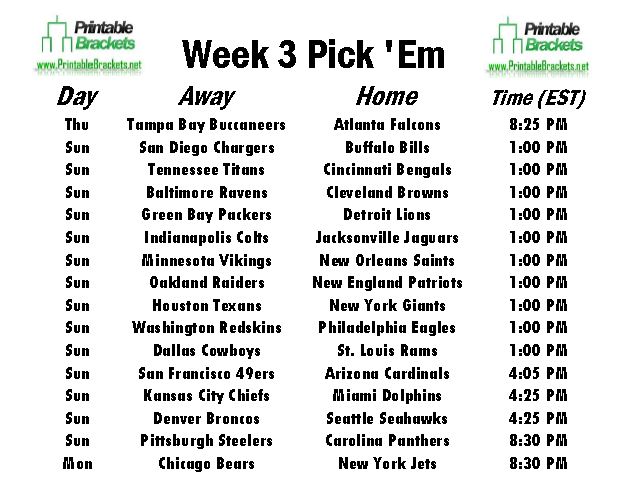 Week 3 of the 2014 season opens up with the Tampa Bay Buccaneers traveling to Atlanta to face the Falcons on “Thursday Night Football.” Some unfamiliar foes will lock horns on the NFL Pick Em Week 3 sheet. This printable sheet is instantly downloadable and completely complimentary.

NFC South foes will square off to open Week 3 as the Bucs battle the Falcons. The Bucs, who finished just 4-12 in 2013, are led by new head coach Lovie Smith and quarterback Josh McCown. Atlanta is also looking to bounce back this year after finishing 4-12 a season ago.

There are 10 early Sunday games on the NFL pick em Week 3 sheet. The early slate is headlined by a meeting between the Redskins and Eagles in Philadelphia. New Washington wide receiver DeSean Jackson will be making his return to Philadelphia after being released by the Eagles in the offseason. Also in early action on the NFL pick em Week 3 sheet, the Detroit Lions will host the Green Bay Packers, the Baltimore Ravens will battle the Cleveland Browns, while the New England Patriots will welcome the Oakland Raiders.

In late action on the NFL pick em Week 3 sheet, the Seattle Seahawks will host the Denver Broncos in a rematch of Super Bowl XLVIII. Seattle smashed Denver, 43-8, to secure its first Super Bowl title in franchise history last February. Also Sunday, the Arizona Cardinals and San Francisco 49ers will collide in an NFC West showdown.

Sunday’s action on the NFL pick em Week 3 sheet wraps up with the Pittsburgh Steelers and Carolina Panthers hooking up on “Sunday Night Football.”

The final matchup on the NFL Pick Em Week 3 sheet takes place in the Meadowlands as the New York Jets will host the Chicago Bears on “Monday Night Football”.