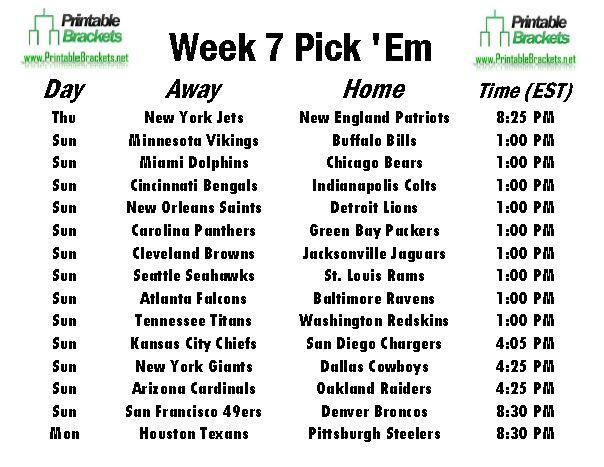 Week 7 of the 2014 NFL season opens up with the New York Jets facing Tom Brady and the New England Patriots on “Thursday Night Football”. The season is nearly halfway in the books and if you’re still looking for printable pick em sheets look no further. Get the NFL Pick Em Week 7 sheet and sheets for all 17 weeks of the season right here.

The Jets and Patriots continue their rivalry in primetime in Week 7. Both games between the AFC East foes were decided by three points in 2013. The Pats escaped with a 13-10 victory at home in Week 2, but suffered a 30-27 overtime loss in the Meadowlands in Week 7. The Patriots captured the division crown after notching a record of 12-4. The Jets finished in a tie for second place at 8-8.

There are nine early Sunday games on the NFL pick em Week 7 sheet. Notable early games include Andrew Luck and the Indianapolis Colts hosting Andy Dalton and the Cincinnati Bengals, Calvin Johnson and the Detroit Lions against Drew Brees and the New Orleans Saints, and the Atlanta Falcons battling the Ravens in Baltimore.

Late action on the NFL pick em Week 7 sheet is headlined by a meeting between the Dallas Cowboys and the New York Giants in the Meadowlands. The Chiefs and Chargers will also renew AFC West pleasantries in San Diego. In primetime, Peyton Manning and the Denver Broncos will welcome the Colin Kaepernick and the San Francisco 49ers on “Sunday Night Football”.

The NFL Pick Em Week 7 sheet wraps up with the Pittsburgh Steelers hosting the Houston Texans on “Monday Night Football”.

Only a pair of teams have a bye in Week 7. The Philadelphia Eagles and the Tampa Bay Buccaneers have the weekend off.