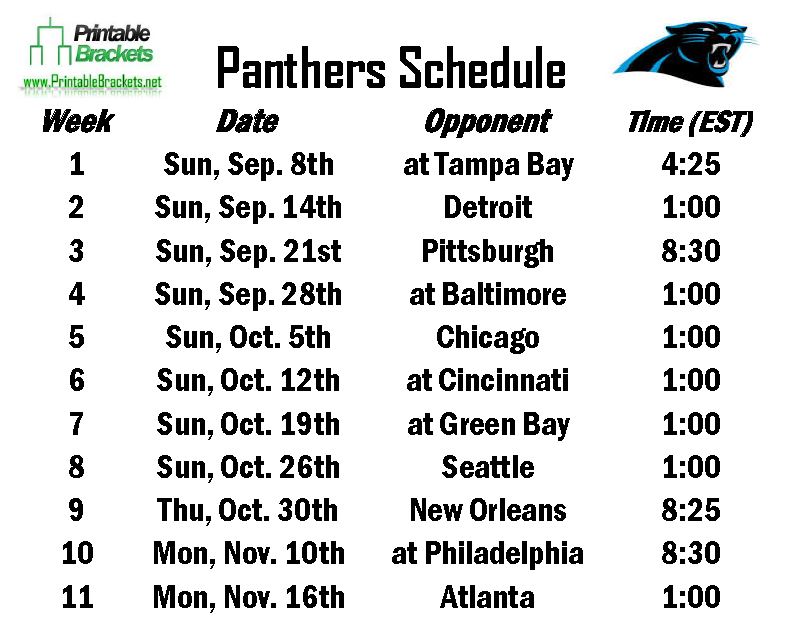 The Carolina Panthers are one of the NFL’s youngest franchises. However, Carolina has accomplished a great deal during its brief history. Before taking a look at the upcoming Panthers schedule, let’s go back and look at the team’s past.

Panthers Schedule: Past and Present

The Carolinas, and more specifically Charlotte, North Carolina, was awarded an expansion franchise by the NFL in 1993. The Panthers, along with the Jacksonville Jaguars, would begin play during the 1995 season. Dom Capers was tabbed to be the franchise’s first head coach and the team selected Penn State quarterback Kerry Collins in the first round of the ’95 draft.

The Panthers played their home games during their first season at Clemson University because construction on their new stadium was ongoing. After beginning the year with five straight losses, the Panthers went on to post the best first-year record for a franchise team at 7-9.

The following year, Capers won Coach of the Year honors for leading Carolina to a 12-4 record and an NFC West title. The Panthers knocked off the Dallas Cowboys in the Divisional Round before suffering a 30-13 loss to the Green Bay Packers in the NFC Championship Game.

The 1998 season marked the end of the Capers and Collins era. George Seifert took over as head coach in 1999. His less-than-stellar tenure was highlighted by a 1-15 finish in his final season in 2001. John Fox became head coach in 2002 and the team signed quarterback Jake Delhomme prior to the start of the 2003 season.

Carolina would reach the NFC title bout again in 2005, but fell to the Seattle Seahawks. The Panthers went 12-4 and secured a first round bye in 2008, but were on the wrong end of a shocking 33-13 loss to the Arizona Cardinals in the divisional round. The loss sent the Panthers into a hole they have yet to completely crawl out of.

After finishing 2-14 in 2010, the Panthers hired Ron Rivera as head coach and selected quarterback Cam Newton with the first overall pick in the 2011 draft. Entering the 2014 Panthers schedule, the team is still looking for its first playoff win since ’05.