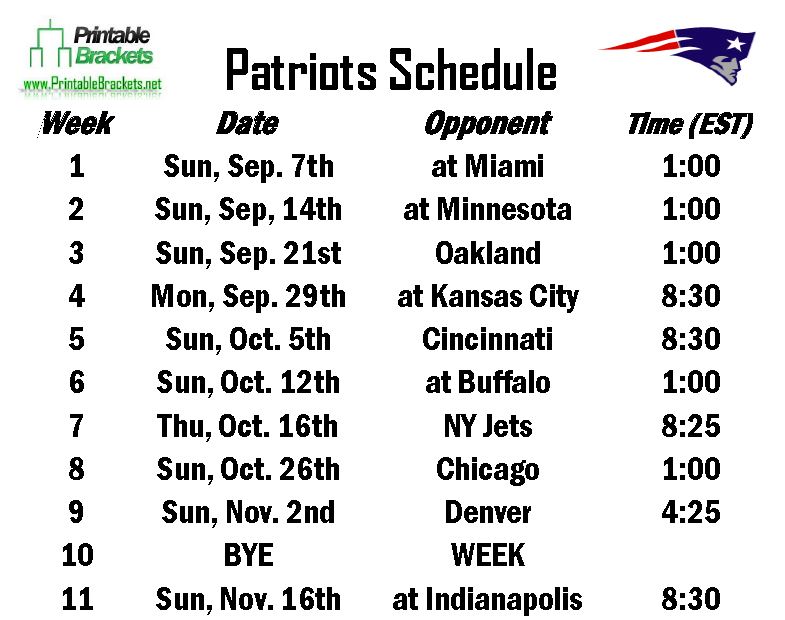 The New England Patriots have gone from NFL laughing stock to undeniable dynasty during their existence. Two men are largely responsible for ushering in a new standard of excellence and a new era of the NFL. Before looking at this year’s Patriots schedule, let’s take a look back at their past.

Patriots Schedule: Past and Present

The history of the Patriots schedule begins in 1960. The Boston Patriots were one of the original eight American Football League, and the Pats beat the Buffalo Bills in the league’s first-ever preseason game. The Patriots made their only AFL playoff appearance in 1963. That year, Boston knocked off the Bills in the divisional round before suffering a 51-10 loss to the San Diego Chargers in the championship game.

After moving to the NFL during the merger in 1970, the team became the New England Patriots to coincide with their move to a new stadium for the 1971 season. The team originally wanted to change its name to the Bay City Patriots, but it was rejected by the league.

The Pats would only make three playoff appearances from 1964-1984, the first of which came in 1976. New England lost all three of the playoff games. In 1985, the Patriots went 11-5, won the AFC East title, and trounced the Miami Dolphins in the AFC title game to earn their first Super Bowl berth. The Patriots would prove to be little more than a sacrificial lamb for the Chicago Bears, who hammered the Pats, 46-10, in Super Bowl XX.

New England wouldn’t win another playoff game until head coach Bill Parcells and quarterback Drew Bledsoe led the team to Super Bowl XXXI. Once again, the Pats failed in their bid to hoist the Lombardi Trophy as they fell to the Green Bay Packers.

After an ugly situation that included a resignation, an antitrust lawsuit and a compensation package, Bill Belichick was allowed out of his contract with the New York Jets to become the new head coach of the Patriots in 2000. During the 2001 season, Bledsoe was injured in Week Two. The injury opened the door to the emergence of Tom Brady and was the first event in what later became a dynasty.

The Patriots went on to win beat the heavily-favored St. Louis Rams in Super Bowl XXXVI in what would be the first of three Super Bowl titles in four years. The Pats also appeared in Super Bowl XLII and XLVI, but suffered losses to the New York Giants in each game. The Pats went 16-0 during the regular season in 2007, but their hopes of the second perfect season in NFL history were dashed by the Giants.