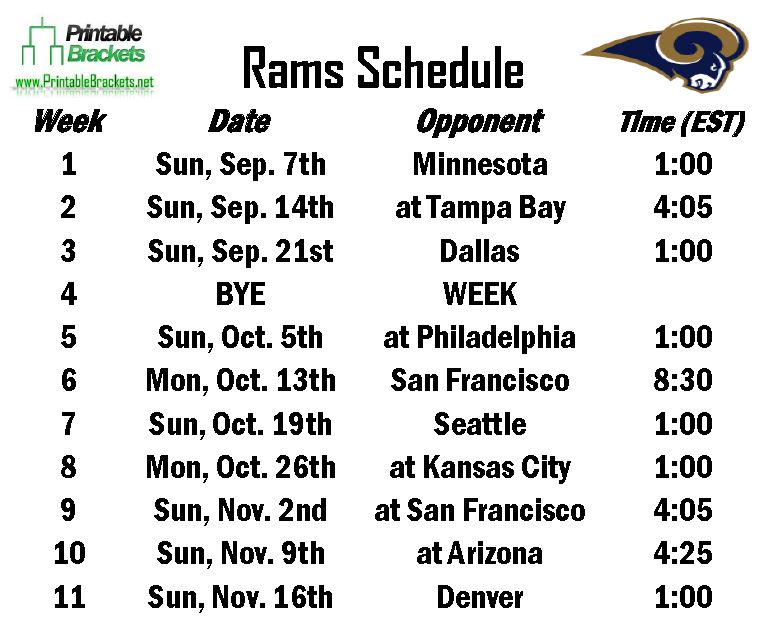 The Rams have taken a long and rather circuitous road to end up in St. Louis. Despite all the changes of scenery, the Rams have fielded some of the more memorable teams in NFL history. Before looking ahead to this year’s Rams schedule, let’s take a look back at the history of the franchise.

Rams Schedule: Past and Present

The history of the Rams schedule began when they were born as the Cleveland Rams in 1936. The moniker was chose to pay homage to Fordham University, which also uses a ram as its mascot. After spending one year in the second American Football League, the Rams joined the NFL.

After failing to post a winning season in each of their first six years in the NFL, the Rams suspended operations for World War II in 1943. The Rams were back in 1944 and went on to win the NFL championship in 1945.

After the title win, the Rams packed up and moved to Los Angeles. After the move, the Rams had the distinction of signing the first two African-American players to play in the league after the war. In 1948, halfback Fred Gehrke painted the now famous horns on the team’s helmets. The horns marked the first modern helmet log in professional football.

The Rams beat the Cleveland Browns for the NFL title in 1951, but they would fail to win another playoff game until after the merger in 1974. Beginning in ’74, the Rams reached the playoffs seven straight years, but they never hoisted the Lombardi Trophy. Los Angeles appeared in the Super Bowl only once during the stretch, suffering a 31-19 loss to the Pittsburgh Steelers.

Led by running back Eric Dickerson and later quarterback Jim Everett, the Rams enjoyed a great deal of success throughout the 1980s. However, the Rams, who by this point were based in Anaheim, again were not able to get over the hump. The never advanced to the Super Bowl and were beaten a combined 54-3 in their two NFC Championship game appearances.

After the 1994 season, the Rams packed up the moving trucks again and landed in St. Louis. In 1999, former Arena League quarterback Kurt Warner and running back Marshall Faulk led the Rams to a 23-16 win over the Tennessee Titans in Super Bowl XXXIV. The Rams returned to the big game in 2001 and were heavily favored to beat the New England Patriots, but suffered a shocking 20-17 loss.

Entering the 2014 season, the Rams have only one playoff win and have appeared in the postseason only twice since 2002.