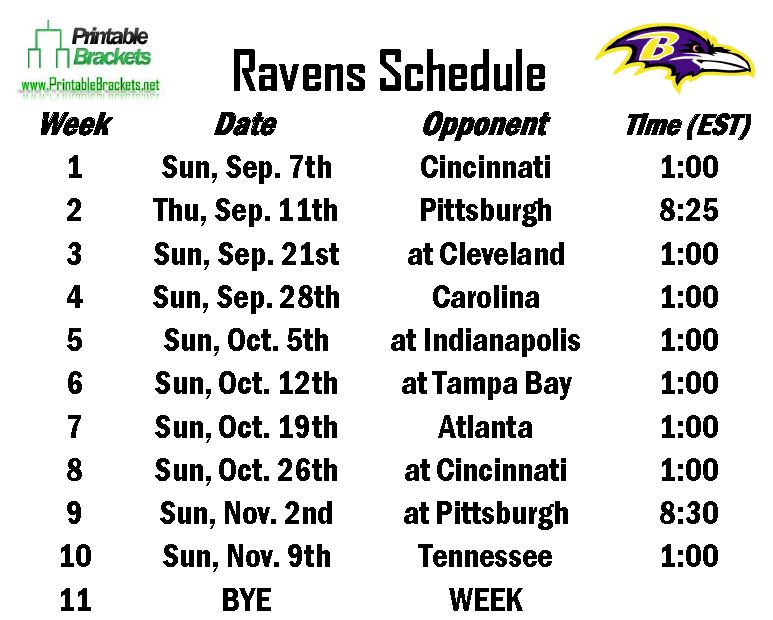 Though their history may be brief, the Baltimore Ravens have already collected a pair of Super Bowl rings. The reason Baltimore’s history is so brief is because in order to look to the future, it was forced to leave its past behind. Before glancing at this year’s Ravens schedule, let’s take a look at how they got to Baltimore.

Ravens Schedule: Past and Present

The history of the Ravens schedule began when owner Art Modell uprooted the Browns from Cleveland in 1996. There were a few caveats attached to the move. First, the NFL promised Cleveland that a team would be back in the city no later than 1999. In addition, Modell was not permitted to use the Browns’ name, likeness or franchise records. In essence, the Ravens would become a new team.

In their first draft as the Ravens, the team selected offensive tackle Jonathan Ogden and linebacker Ray Lewis in the first round. These two players would become the backbone of the team for the next decade and beyond.

After three straight losing seasons to begin their stay in Baltimore, the Ravens fired head coach Ted Marchibroda and replaced him with Brian Billick. Led by one of the fiercest defenses in NFL history, the Ravens clobbered the New York Giants, 34-7, in Super Bowl XXXV. Lewis was named the game’s MVP.

Billick’s tenure would last until he was fired after the 2007 season and was replaced by John Harbaugh. The same year, the Ravens selected quarterback Joe Flacco in the first round of the draft. The Ravens advanced to the AFC title game in ’08, but suffered a 23-14 loss to the rival Pittsburgh Steelers.

The Ravens reached the playoffs the next three years, but never made it past the conference title game. In September 2012, Modell, who sold his controlling stake in the team in 2004, passed away. The Ravens raced out to a 9-1 start and would eventually win the AFC North. Prior to the start of the playoffs, Lewis announced that he was retiring at the end of the year.

After downing the Colts in the opening round, the Ravens pulled off a 38-35 upset double-overtime win over the Broncos in Denver. The Ravens went on to trounce the New England Patriots in the AFC title game to secure a spot in Super Bowl XLVII, where Harbaugh, Flacco and Lewis led the team to a 34-31 win over the San Francisco 49ers.