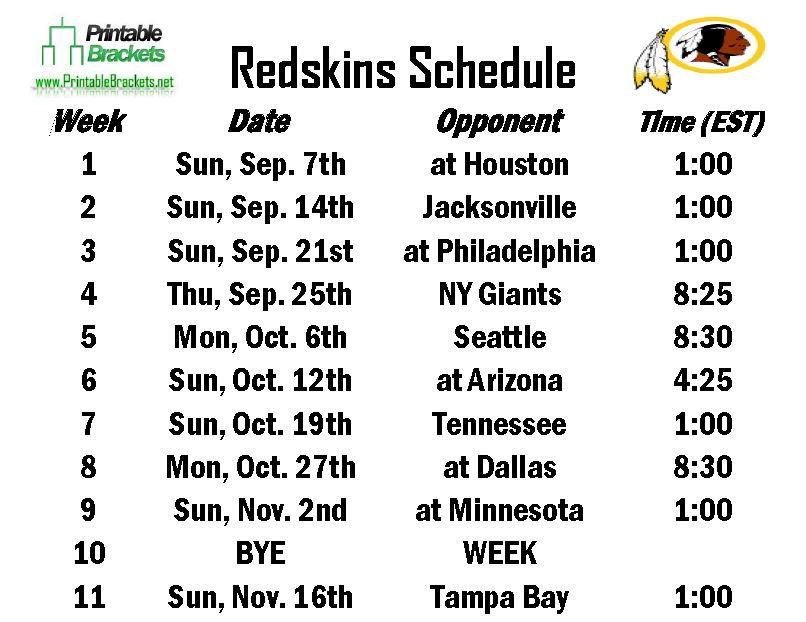 The Washington Redskins are among the older and most decorated franchises in NFL history. However, there has been plenty of controversy surrounding the franchise. Before looking at this year’s Redskins schedule, let’s go back and look at the team’s past.

Redskins Schedule: Past and Present

The franchise was originally founded as the Boston Braves in 1932. The team became the Boston Redskins in 1933 and played at Fenway Park until 1936. The franchise moved to the nation’s capital and became the Washington Redskins 1937. They defeated the Chicago Bears in the NFL Championship Game in their first season in their new home.

The ‘Skins beat the Bears again in the 1942 championship game, but did not have a single playoff appearance from 1946-70. During this run of futility, the Redskins were the last American football team to integrate in 1962.

Led by NFL Most Valuable Player Larry Brown, the Redskins went to their first Super Bowl in 1972. However, they were unable to overcome the undefeated Miami Dolphins and suffered a 14-7 loss.

Led by head coach Joe Gibbs, quarterback Joe Theismann and running back John Riggins, the Redskins defeated the Dolphins, 27-17, to capture their first title since ’42. The ‘Skins returned to the big game the following year, but suffered a 38-9 loss to the Los Angeles Raiders.

Washington would again win the NFC crown and trounce the Denver Broncos, 42-10, in Super Bowl XXII. Just four seasons later, quarterback Mark Rypien guided the Redskins to a 37-25 victory over the Buffalo Bills in Super Bowl XXVI. Entering 2013, the victory marked the last time the ‘Skins hoisted the Lombardi Trophy.

Since the Super Bowl win in 1992, the Redskins have only appeared in the playoffs five times. However, they were led to the postseason in 2012 by quarterback Robert Griffin III, who the Redskins traded up to take with the second overall pick in the ’12 draft. “RG3” headlines a young core that includes running back Alfred Morris and wide receiver Pierre Garcon.

Throughout the years, many people and groups have taken exception with the name “Redskins” because of its racial connotation. However, several attempts to get the franchise or the league to change the name have all failed.