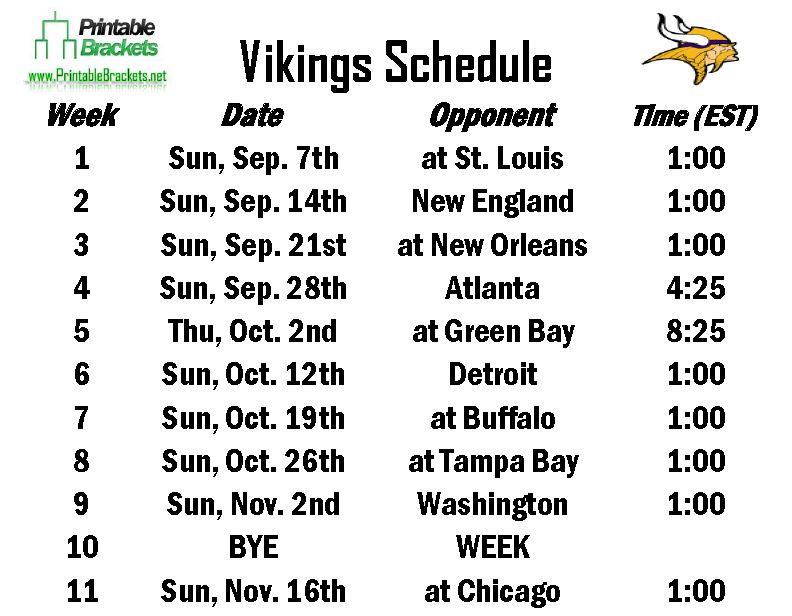 Few teams have had more success during the regular season since the AFL-NFL merger than the Minnesota Vikings. However, the Vikings are one of the teams still looking to hoist the Lombardi Trophy for the first time. Before glancing at this year’s Vikings schedule, here’s a look back at the team’s past.

Vikings Schedule: Past and Present

Minnesota was originally awarded an expansion franchise in the American Football League in 1959, but eventually ended up getting an NFL franchise in January 1960. In September of that year, the name “Vikings” was adopted.

The Vikings opened their first-ever season with a 37-13 victory over the Chicago Bears in 1961. Minnesota, however, stumbled to a 3-11 mark in its inaugural year. The Vikes made their first playoff appearance in 1968, but lost in the Divisional Round to the Baltimore Colts. The following year, the Vikings defeated the Cleveland Browns to capture their first NFL championship. Minnesota would go on to suffer a 23-7 loss to the Kansas City Chiefs in Super Bowl IV.

The Vikings would continue to have regular season success, making the playoffs 15 times from 1978-2000. The Vikings went 15-1 and were the favorite to win the Super Bowl in 1998, but the suffered a shocking 30-27 overtime loss to the Atlanta Falcons in the NFC title game.

Before the start of the 2009 season, the Vikings signed former Packers quarterback Brett Favre. Minnesota went 12-4 and reached the conference title game once again, but came up short in a 31-28 overtime loss to the New Orleans Saints.

Little was expected of the Vikings in 2012, but behind Adrian Peterson’s 2,075 rushing yards they earned a Wild Card spot by going 10-6 and beating the Packers in the final game of the season. However, the Packers had the last laugh as they cruised to a 24-10 in the opening round.