The oldest and most well-known tennis tournament in the world is The Championships, Wimbledon. Each year since 1877, the tournament has been played on the legendary grass courts at the All England Club. The 2020 Wimbledon draw will be held shortly before the prestigious event gets underway on June 24th. Weather permitting, the 127th edition of the tournament will wrap up on July 7th.

In July ’77, the first Wimbledon Championship took place at the All England Lawn Tennis and Croquet Club. The only event that was held was the Gentleman’s Singles competition and the field consisted of 22 players. Spencer Gore defeated William Marshall in straight sets in the first-ever final. Women’s singles was added in 1884. Double’s competitions later followed in 1913. 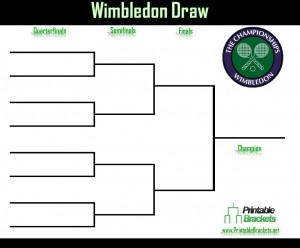 Wimbledon has been interrupted twice during its storied history: From 1915-18 for World War I and from 1940-45 for World War II. What is known as the “Open Era” began in 1968. This marked the first time events allowed professional players to compete against amateurs. Australian Rod Laver won the first Open title at Wimbledon that year.

Since the dawn of the Open era, American Pete Sampras and Swiss star Roger Federer have won seven titles apiece. Sampras won from 1993-95 as well as 1997-2000, while Federer captured consecutive crowns from 2003-2007. Federer’s run of five straight titles matches a record set by Bjorn Borg from 1976-80.

On the women’s side, Martina Navratilova has won a record nine championships. Navratilova’s first victory came in 1978. Her last was in 1990. She won a record six in-a-row from 1982-87. In 2012, gentleman’s singles champion Federer and women’s singles champion Serena Williams each pocketed just under $1.8-million for their respective victories. Runners up Andy Murray and Agnieszka Radwańska netted just over $870,000.

In 2010, American John Isner and Frenchman Nicolas Mahut engaged in the longest match in Wimbledon history. The 183-game marathon lasted 11 hours and five minutes over the course of three days. The epic battle, which is also the longest in all of tennis history, was won by Isner, 6-4, 3-6, 6-7, 7-6, 70-68.