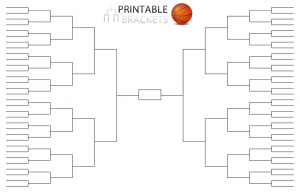 The basketball tournament brackets for the annual NCAA tournament have changed over the years. In 2001, the NCAA added a play-in game for two teams that were considered the weakest of the field. This added an extra team to the normal field of 64. In 2011, more teams were added to the basketball tournament brackets. This rarely affects someone filling out their bracket, as these teams enter as the #16 seeded team and they have to play one of the four #1 seeds. History plays against these teams. No 16th seeded team has every beaten a #1 seeded team in the history of the NCAA tournament.

In your standard basketball pool, most points are earned in the selection of the final 16 teams. There is always a few upsets and underdog stories that highlight the news wire during these rounds. If your goal is to win a tournament pool, you’ll need to know who is going to be in the running on the final weekend. Almost everyone who has a chance to win a pool with their basketball tournament brackets has picked two or three of the final four teams.

When picking your final basketball tournament picks keep in mind the experience level of the teams and coaches. In most cases, the surprise teams that make the final group of 16 teams have either one stand out superstar player or are a group of seniors that have played together for some time.

Basketball tournament brackets aren’t just reserved for March Madness as the NBA also uses a bracket system. A total of 16 teams qualify for the NBA playoffs, with eight teams securing a spot from each conference. There are three best-of-seven series in each conference before the best-of-seven NBA Finals begins. Pools using NBA basketball tournament brackets are not as popular as March Madness, but more and more of them pop up each year.