The Formula 1 2013 schedule will wrap up with the Grand Prix of Brazil on Sunday, November 24th. Some of the stops on the Formula 2013 schedule include Malaysia, Spain, Monaco, Canada, Korea, Japan, Abu Dhabi and the United States. 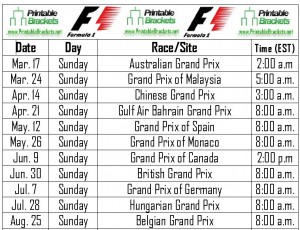 The Formula One World Drivers’ Championship was first handed out to Italy’s Giuseppe Farina in 1950. The winner is determined by a points system used during Grand Prix events. Another honor, known as the Formula One World Constructors’ Championship, is given to the most successful F1 constructor during a season. Scuderia Ferrari has taken home the title a record 16 times since the award was first handed out in 1958.

No driver has won the F1 World Drivers’ Championship more times than Germany’s Michael Schumacher, who has captured the crown seven times. Schumacher’s first title came in 1994. He later won five straight championships from 2000-04. Argentina’s Juan Manuel Fangio sits alone in second place on the all-time list with five titles. France’s Alain Prost is in third with four championships. The only Americans to win the title are Phil Hill in 1961 and Mario Andretti in 1978.

Sebastian Vettel of Germany enters the 2013 season as the three-time defending champion. Vettel clinched his third title in the final race of the season in 2012. Vettel’s constructor Red Bull has also won three straight titles.

In all, nearly 50 drivers have lost their lives as the result of behind the wheel of an F1 car. The last to be killed during a Grand Prix race was Ayrton Senna in 1994.