Preparation is always the focal point when any new baseball season approaches. While big leaguers gear up for the upcoming campaign in Spring Training, fantasy baseball players start preparations with the scouting process. Some players continue to dwell on past lost seasons and wonder where it all went wrong. A number of small things can mean the difference between a championship and a last place finish. Every season begins with a fantasy draft, and participating in a fantasy baseball mock draft could help give you the edge you lacked in previous seasons.

These drafts can benefit players in so many ways. They can also be the difference between hoisting a championship trophy or being forced to pick up a tab. Whether it’s online or in person, fantasy players of all levels should participate in at least one mock draft. 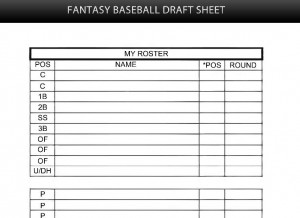 A mock draft is meant to simulate what will transpire during your league’s live draft. Whether it’s rotisserie, head-to-head, AL-only, NL-only or any variation of fantasy baseball, you will be sure to find a mock draft to fit your needs.

While participating in a mock draft, there are few key things to keep track of. While it’s very important to keep tabs on who you are drafting and where you are selecting, it’s equally as important to monitor what the other drafters or doing. By doing so, you will have a much better game plan heading in to your actual draft.

Based on the knowledge level of the participants in the mock draft, you can put together a cheat sheet that determines where you think certain players will go on the actual draft day. The cheat sheet can then alert you as to when you may be overvaluing a player, or where you know you are likely getting a steal.

Mock drafts can also help you get accustomed to how the draft process works if you are participating in a fantasy baseball league for the first time.