First-pitch of the 2013 MLB season is almost here. As hope springs eternal in Major League cities across the United States, fans and prognosticators are busy making their future MLB picks. To gear up for the season, Printable Brackets has created a 2013 MLB Baseball pool that is fun for any fan.

The pool spans the duration of the season and includes every game on the schedule.

For the second time in three seasons, the San Francisco Giants head into the 2013 MLB season the defending World Series champions. After falling behind two-games-to-none in the NLDS against the Cincinnati Reds, the Giants went on a historical tear that was culminated by a four-game sweep of the Detroit Tigers in the Fall Classic. The Giants earned their seventh World Series title in franchise history.

The 2013 season will feature a number of changes. First and foremost, the Houston Astros are moving from the National League Central to the American League West. The move means all six divisions now have five teams apiece. The Astros will be featured on Opening Night as they will face the in-state rival Texas Rangers on Sunday, March 31st. 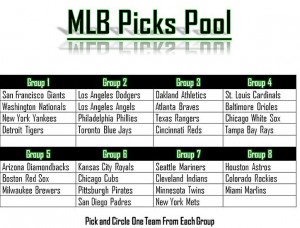 Because of Houston’s move, Interleague games will now take place throughout the season for the first time. Each team will play a total of 20 Interleague games. The other 142 will be played within the respective league. The 84th edition of the All-Star Game will take place at Citi Field in New York on July 16th.

The MLB Baseball Picks pool is a fun and easy way to follow your favorite teams throughout the season. The 30 MLB teams are broken up into eight groups. To participate in the pool, simply pick one team from each group that you want to be represented by for the entire season.

For example, Group 2 consists of:

Select one team from that group and that will be your club for the rest for the season. Each victory is worth one point. The player with the most points at the end of the World Series is the winner. For an added bonus, you can take select weeks during the season and make each victory worth two points. You could also increase the value for playoff victories. The MLB Baseball picks pool will not only help you keep tabs on your favorite teams, but it will allow you to track your bitter rivals as well.