The 68 qualifying NCAA basketball teams in the tournament are constructed from 31 conference champions that receive automatic bids and 37 teams that receive “at-large” bids. The “at-large” bids selected for the NCAA basketball bracket are determined by a selection committee that reviews and analyzes the resumes of all potentially qualifying teams. After the 37 “at-large” teams have been selected, the selection committee then seeds the teams from 1-68. 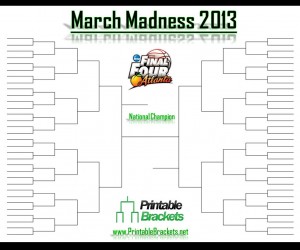 Brackets are broken down into four regions (example: South, Midwest, East, etc.). The teams are divided into regions by taking the first four seeds (1-4) as ranked by the selection committee and placing each of them in a region as the #1 seed. The next four seeds (5-8) are then added as a #2 seed to each region. This continues for each seed until the there are four automatic bids and four “at-large” bids remaining.

The second round of the tournament features the remaining 64 teams. In this round, the seeds competing are laid out in traditional fashion of 1v16, 2v15, 3v14, etc. The 32 winners of the second round will then compete in the third round. This format continues through the Sweet 16, Elite 8, and Final Four round until the NCAA basketball bracket reaches the last two teams and compete for a national championship.