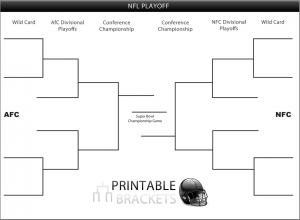 In recent years it has become popular to fill out a Super Bowl bracket not only in terms of betting for serious money but also in small scale office pools and more casual settings. Whether you are a serious football fan or a casual viewer then take note of these important hints to help you fill out your super bowl bracket.

In terms of a Super Bowl bracket, records rarely mean anything. Of course if the team has only won three games and they are playing a team that has won nine there should be some consideration. Otherwise, however, the records are generally within a few games and it is important not to dwell on this statistic.

Some teams just play badly against other teams. Maybe it is a warm weather team playing in a cold weather stadium or maybe it is simply a rivalry, but either way be sure to take a look at the history of the teams playing one another to best make your predictions.

Super Bowl Bracket: Who is Home?

Arguably more than any other sport, football results are effected by which team is home and which is away. It is by no means a sure thing simply because a team is home, but if you are seriously torn between two teams and doubting a straightforward selection then go with the home team.

Spreads often change right up until the day of the game and your Super Bowl bracket will likely already need to be complete. Keep an eye on them anyway as they can be helpful in getting a sense of what the world of football predicts. Spreads are meant for betting and a Super Bowl bracket is a form of betting so use them to your advantage.