Uses for a Tournament Bracket Maker

A tournament bracket maker is most commonly used for the NCAA men’s basketball tournament in March. Every year, millions fill out bracket sheets in an effort to pick as many of the 67 tournament games correctly as they can. 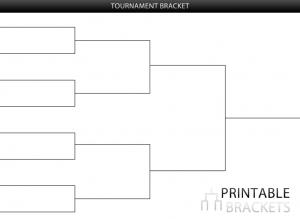 In addition to the men’s tournaments, women hold their conference tournaments and version of “March Madness” at the same time. Following the conclusion of these tourneys, the 16-team playoffs in the NBA and the NHL get underway.

In June, the College World Series begins. As the year rolls on, the postseason in Major League Baseball and the National Football League starts up. Throughout the year, the four Grand Slam events in professional tennis and the four majors in professional golf take place.

All of these events and much more can easily be followed and tracked with the use of a tournament bracket maker.

Other Uses for a Bracket Maker

A bracket maker isn’t only for collegiate or professional sporting events. They can be used to keep track of teams or participants in recreational or school-related events. You can track friendly competitions at a party or other gatherings. A tournament bracket maker could even be used for spelling bees, or daily or weekly school contests.