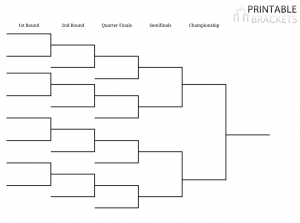 A tournament bracket template can truly be useful throughout an entire calendar year. If you’re a sports fanatic, these templates are the perfect way to monitor and track all the year basketball, baseball, football and hockey tournaments.

Collegiate and professional sports have always been a big part of the fabric of the United States. Long before the invention of a tournament bracket template, legends were leaving their indelible mark in timeless venues and arenas. Some of the more popular and noteworthy U.S. tournaments and championships include:

• NCAA Men’s Basketball Tournament – Established in 1939. The tournament began with eight teams and has expanded several times throughout its history. A total of 68 teams currently participate in the modern tournament.

• NFL Playoffs – Though the first NFL Championship Game was held in 1933, the playoffs first began with four teams in 1967. The playoffs expanded to eight teams when the NFL merged with the AFL in 1970. Today, 12 teams play in the tournament.

• NBA Playoffs – The NBA playoffs began when the league was known as the BAA in 1947. The playoff field has expanded and had games added several times throughout history. Sixteen teams compete in the playoffs as they are known today.

• NHL Stanley Cup Playoffs – The NHL has always used a playoff system throughout its history, but didn’t wrest full control of the Stanley Cup from the Pacific Coast Hockey Association until 1926. Sixteen teams participate in the playoffs as they are known today.

A tournament bracket template makes keeping track of all these events easier than ever before.