The inaugural WBC took place in 2006 and stars such as Derek Jeter, Ken Griffey Jr. Albert Pujols and Pedro Martinez all competed for their respective countries. In ’06, Japan, South Korea, Cuba and the Dominican Republic all advanced to the championship round. In the WBC championship game, Japan knocked off Cuba, 10-6. 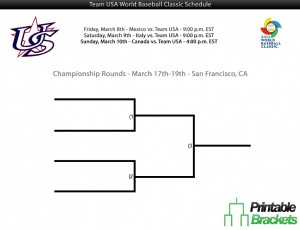 In the second WBC in 2009, Japan defeated South Korea in 10 innings, 5-3, to win the championship for the second straight time. Pitcher Daisuke Matsuzaka was named the Most Valuable Player in each of the first two tournaments.

The current WBC format includes 16 teams that are broken up into four different pools. The four teams in each pool will square off in “round robin” play over a three-day stretch. Two teams from each pool will advance to the second round, which employs a modified double-elimination tournament system. Four teams will emerge from the second round and meet in the championship round. The championship game will be on March 19th.